How does Twitch.TV make money?

I’m a huge Twitch fan. Even though I can’t say I spend a lot of time watching people play video games online, as I can’t maintain a healthy relationship AND a gaming console at the same time, I decided that the occasional Twitching is a great way to blow off some gaming steam.

Twitch is being used by almost 50% of the Millennials worldwide and take almost 1% of the bandwidth in the world. Their monetization techniques are equally impressive.

Let’s get down to business and uncover Twitch’s revenues and business model.

What is Twitch, who’s using it, how it became a hit and why Amazon snatched it for $970M?

In August 2014 Amazon shocked the gaming and video streaming world by announcing it will be acquiring Twitch after bidding war with Google, for $970 million in cash, only 3 years from launching the product.

For those of you who remember Justin.tv, a website / app responsible for introducing the world to social live streaming 8 years before Meerkat ot Periscope, congrats – you’re as old as me. However, there is some relevance to this anecdote. In 2011 Twitch was launched as a subsidiary of Justin.tv and was focused on video game content. Not long after launching the Twitch channel, Justin.tv announced they are going to focus solely on Twitch and shut down any further operations.

Users were able to create channels where they update their details and upload videos of themselves play video games or stream their gameplay in real time (kinda).

And people really like it apparently. According to Qwilt who develop and measure video streaming infrastructure, Twitch is accounted for more than 40% of the live streaming traffic in the U.S. Traffic in general was 1.8% of the entire internet traffic, second only to Google, Netflix and Apple services. 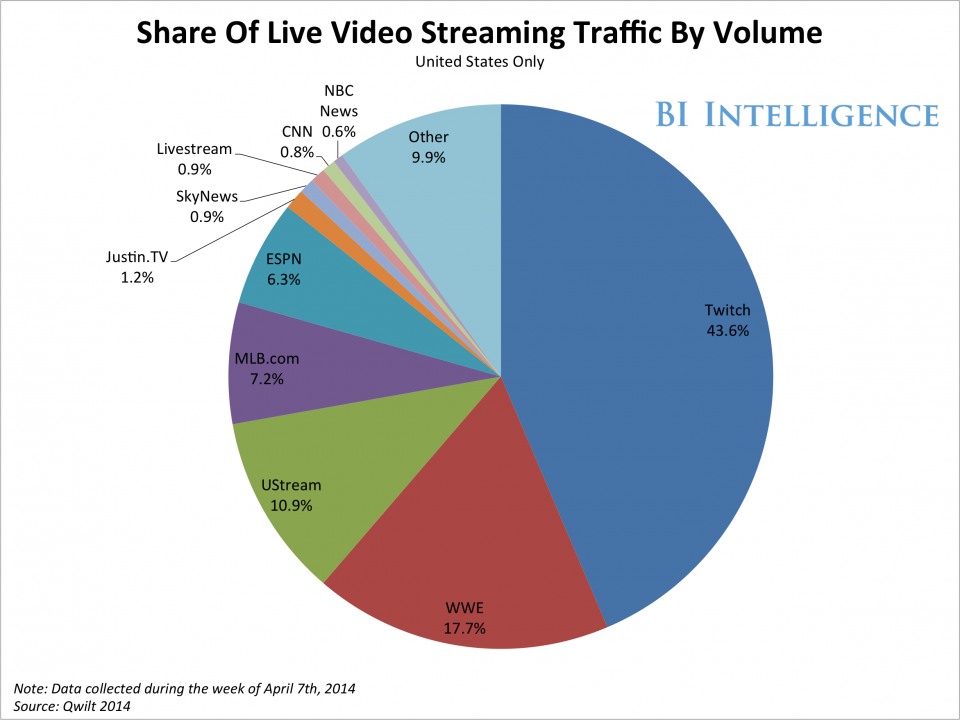 As of 2015, an average viewer of Twitch is watching a stream together with over half a Million people at any point and spend over 420 minutes in the site every month (in comparison to YouTube’s average 291 minutes). Twitch has its own iOS and Android apps and has been integrated with Xbox and PlayStation consoles. PC gamers can also upload footage to Twitch. Their app is available on the web, all mobile OS, Playstation, Xbox and Amazon Fire TV.

There are numerous speculations regarding why Amazon bought Twitch. The official answer is “user community and the live streaming experience it provides”.

So what are Twitch’s monetization channels and how do they work? 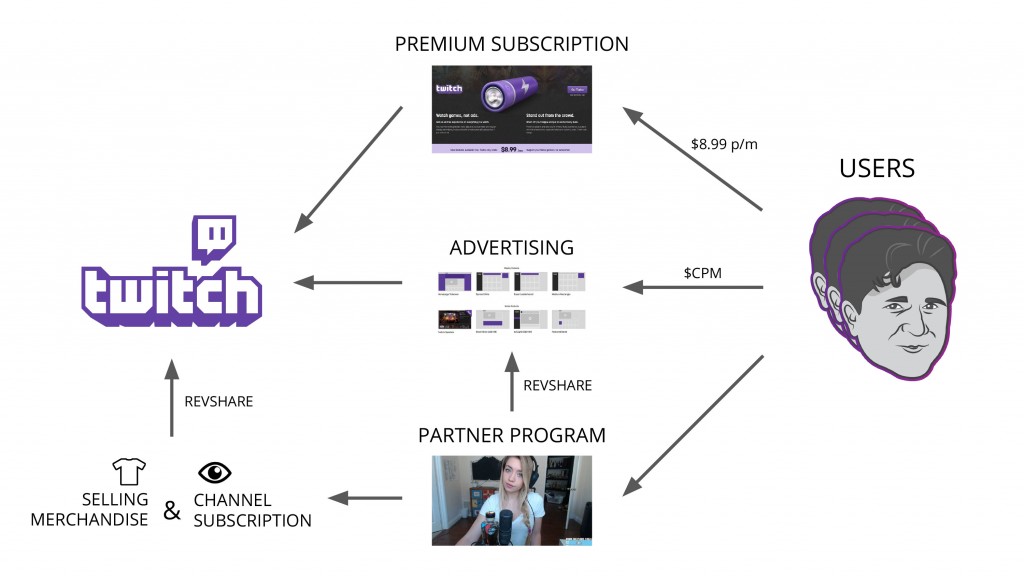 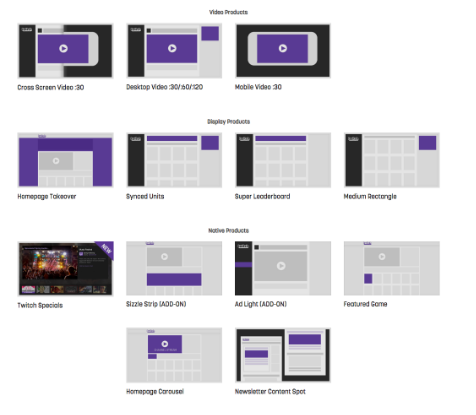 In order to get rid of the ads that can get pretty annoying, users are welcome to sign up to Twitch Turbo and for $8.99 a month they get the adblock experience – No pre-rolls, no mid-rolls, no companions, no display ads. However, front-page takeovers are still being shown. Probably because it’s not perceived as invasive. 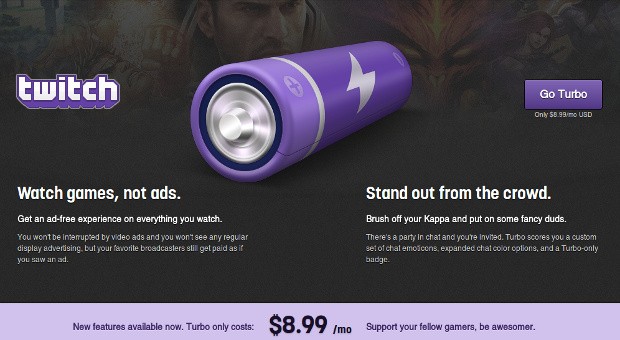 Partners (13,476 partners as of 2015) – Twitch Partners is an exclusive plan for gamers who wish to broadcast regularly on the platform and have regular and average concurrent viewership of 500+ and broadcast at least 3 times a week.

The game doesn’t really matter. If you’re moving to the platform from a different broadcasting platform such as YouTube you can still partner with Twitch, however it is harder to get accepted as you need an average “views per video” of 15,000 views or at least 100,000 subscribers. Hats off to Twitch for keeping such high standards, but this is what makes their platform so good. Twitch Partners get to monetize content in many ways such

Twitch Partners get to monetize content in many ways such as: 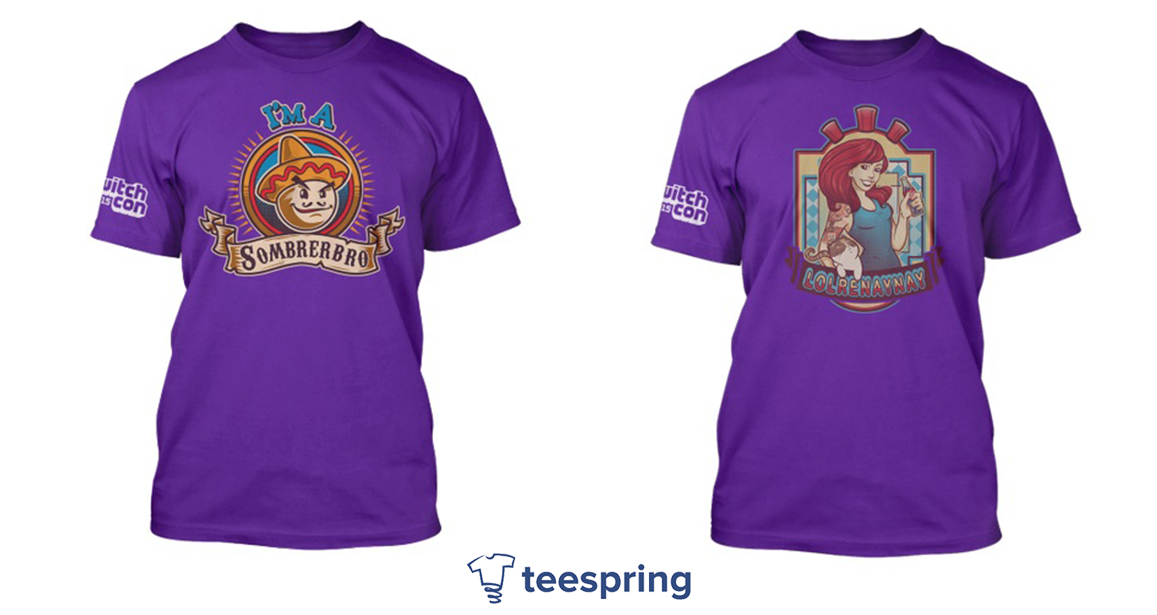 In addition, partners can get tips from their viewers which can actually get to a lot of money. 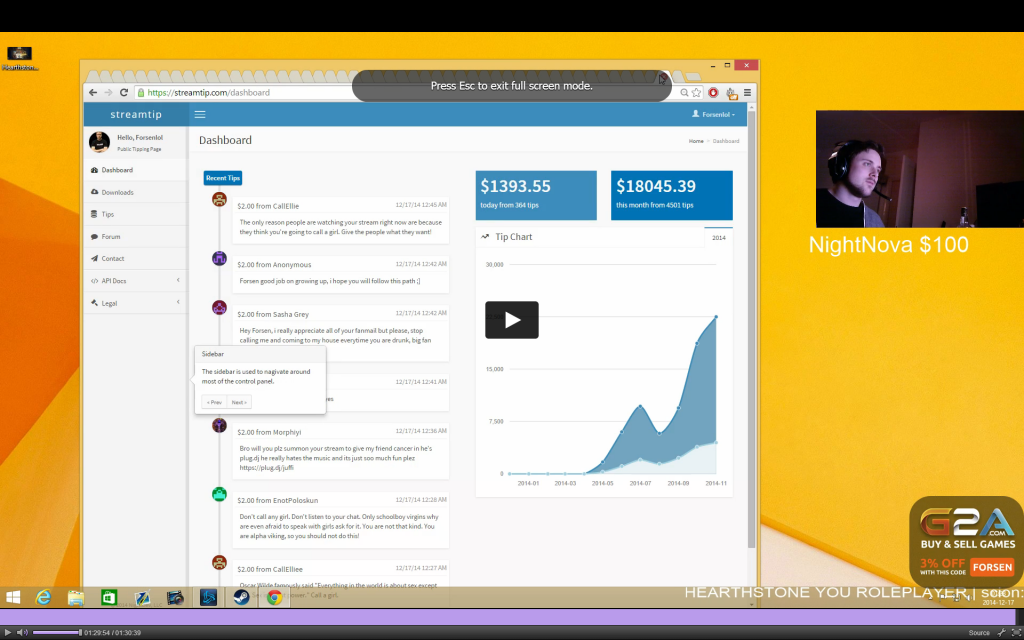 And that’s how you sell a company to Amazon in $1B after 3 years. Simple, elegant monetization. You can read more about how much money a streamer can make on Twitch here.

That’s all folks, I hope you enjoyed this Revenue Spotlight. Don’t forget to subscribe if you want to be notified about our newest posts and get a weekly bundle of the best Revenue Hacking links out there.

Did you enjoy this post?
Get the best practices to grow your online business, once a week, right to your inbox.
If your friends didn’t share this already, now is the time.

Marketing & Business Development @ Similar Web. CEO @ Tapdog, Moolta.
We also do deliveries.
Get the best practices to grow your online business, once a week, right to your inbox.